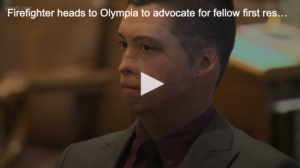 Daniel Lyon was the sole survivor of a fire truck crash in 2015 and suffered burns on over 70 percent of his body while responding to the massive Twisp River wildfire. He was recently featured on K5 News for his plan to change the a court doctrine that prevents first responders from being able to END_OF_DOCUMENT_TOKEN_TO_BE_REPLACED